Purchased in a container of antiques from Delhi, India, this is an interesting wood framed color printing of an Illustration of the King and Queen in old Bombay (now Mumbai) India. The Royal Couple - King George VI and Queen Elizabeth are depicted in their coronation robes with a probable Circa of late very late 1930s. The inset b/w photo that this illustration was made from was at their Coronation in 1936. 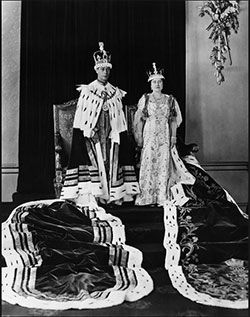 This framed piece is from a calendar and has color fading, small flaking, a few scratches noticeable due to it's age at roughly 80 years old. King George VI ruled from 1936 to his death in 1952 and was considered "King" or "Emperor" of India in addition to England. India became an independent state in 1950.